I first reached out to Elizabeth Sutton in December after seeing her posts on social media. Recently divorced with 2 young children, Elizabeth had experienced a tragic loss: while displaying her works at Art Basel, two of her employees, also dear friends, were in a devastating car accident. One did not survive, and the other was seriously injured. In dealing with the aftermath of the accident, all of her artwork in Miami was haphazardly packed and shipped to her studio in Long Island City. In the process, many paintings were damaged, and she herself felt emotionally damaged.

When Elizabeth and I spoke, she talked about a feeling of chaos, both in her personal life and in her studio. And, she knew that the chaos would increase the following month when she would be closing a pop up store in Soho and sending all of the art and supplies there to the Long Island City studio.

Elizabeth also expressed how her art studio, once a place of great inspiration, was now filled with sad memories and completely disorganized. That’s when Resourceful Consultants got involved. Our goal was not only to organize Elizabeth’s Long Island City studio, but also to create a hip, fun vibe that would match the mood of the vibrant pop art that is Elizabeth’s signature style.

Elizabeth and I met in her studio the following month. We talked about the organizational challenges she was facing, and how Resourceful Consultants could help. Elizabeth demonstrated how labor intensive each of her paintings was by crafting a single butterfly, gorgeous and glittered, while we watched. We met her team in order to understand how they worked together and separately, so that we could determine how best to organize the physical space in the studio.

Our plan unfolded in stages. First, Elizabeth painted a colorful, geometric pattern on the floor in the studio. Then, we suggested shelving units that could line an entire wall of the studio and streamlined desks in order to address the shortage of storage space. Ever the creative genius, Elizabeth decided to paint the shelves in bright primary colors to match the floor and to create custom decals for the desks, transforming them into pieces of art.

Finally, my organizing team spent a day at her studio purging, categorizing, containing and labeling. Here we are, hard at work:

At the end of the day, we were left with a glitter paradise that’s functional and fabulous. Here are our “before” and “after” pictures: 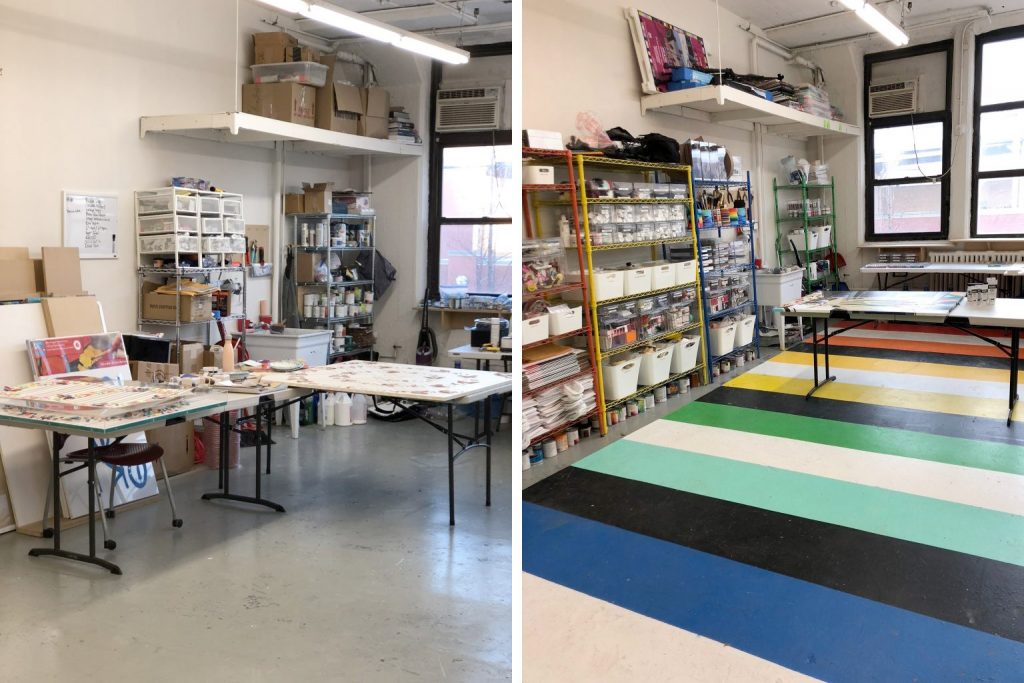 NextNew Year's Resolutions You Can Keep