Over the past few months, I’ve had a number of clients ask me for help organizing storage units. Some clients have multiple storage units and some have just one. In some cases, the storage units are complimentary perks that come with apartments, and, in other cases, exorbitant fees are paid. Sometimes, the client knows exactly what’s stored in the unit and wants to make it less cluttered or more appealing. And sometimes, the items have been put away for years, and the client has no idea what s/he will find there. While I generally believe that a client is better off purging and living within his/her space means, here are some instances when a storage unit is a good idea:

END_OF_DOCUMENT_TOKEN_TO_BE_REPLACED

This month I was profiled in an article in AARP magazine entitled, “Declutter Your Life – Now! Meet the Queen of Clean”.  While just being chosen for the profile was exciting enough, what went on behind the scenes was truly a thrill for me!  Here’s the article, and here’s what it was really like to be the “Queen of Clean”.

First, I got to work with Jancee Dunn.  For those of you who don’t know her, Jancee has written for every major magazine, covering dozens of celebrities (Bono, Madonna, Brad Pitt, Cyndi Lauper).  The idea that she would be writing an article about me after she had just finished working on a project with Cyndi was just unfathomable.  And, Jancee was so easy to work with and such a lovely person, I enjoyed every minute of my time with her.

One day, Jancee accompanied me to a client’s apartment.  While at first it felt a little strange to be observed, Jancee was just a “fly on the wall”, and I quickly forgot she was there.  Then, she wanted to see my house, so we met there one morning. We chatted as I opened closets and drawers showing her my organizing techniques.  Everything was neat as a pin until I opened my husband’s closet and a yellow promotional bag was sitting on the floor.  To quote Jancee quoting me in the article, I said, “What the hell is this?”  I just love that she included that!

I next heard from AARP when they wanted to schedule a photo shoot with me.  I imagined they would send a photographer and snap a few pictures, but that wasn’t what they had in mind at all!  In early June, I received a “call sheet” listing me as the “talent” and then proceeded to list a dozen other people such as the photographer, prop stylist, wardrobe stylist, and set designer.  I couldn’t get over being called “the talent”.  I briefly wondered if a mistake had been made.  It became more real though as I had calls with the wardrobe consultant about my size and style and the prop master about how I would style a living room.

Then, it was the day of the shoot. I arrived at a sleek, airy downtown loft at 9:00 in the morning ready for my big day.  The photographer and his assistants were setting up their equipment.  Living room furniture had been rented and set up in one part of the loft, and the prop stylists were creating a messy “before” living room (later, I would transform it to the “after”).  Another part of the loft was set up with racks of clothes, rows and rows of shoes, a table filled with jewelry, and a whole table filled with crowns and scepters (for the Queen look).  A make up artist was setting up her brushes near the wardrobe section while I looked around still not quite believing that I was “the talent”.  To steady my nerves, I helped myself to a yummy breakfast which was set up in a back area. 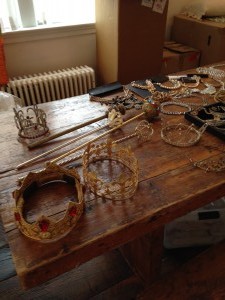 After I had eaten, I had my hair and make-up done by Lauren.  As a person that rarely wears make up, it was fascinating to see how much time she spent making me look my best.   Whenever I thought there couldn’t possibly be any more makeup to put on my face, Lauren added something, smoothed something, and added something more.  Then she worked on making my hair just the right amount of curly for another hour!  I was starting to really enjoy being the talent.

Next it was time to try on clothes.  Jessica, the wardrobe stylist had prepared several looks for me.  The first was a long gold dress with a fur stole.  I loved it, but when the photographer took some test shots in front of the “before” living room, the color didn’t provide enough contrast.  Instead, I wore a long red satin skirt with a tailored white shirt complete with a crown and scepter for most of the shoot.  When the clothing didn’t fit perfectly, they pinned and clipped the side not on camera until it did. 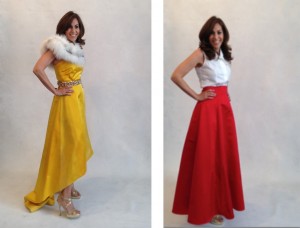 Now, we were ready to start the shoot.  Chris, the incredibly talented photographer, taught me how to smile on a scale of 1 to 7 (1 is no smile, 7 is a big smile) and everything in between.  I posed leaning back, moving my shoulder down an inch, my arm up an inch, turning the scepter up and back and turning my head this way and that.  During all of this, Lauren and Jessica would periodically stop to arrange my clothes, fix my hair, and dab my makeup.  The photographers and the technician would crowd around big screens scrutinizing the photo angles and the colors.  Who knew being a model was so complicated?

After a few hours of posing, we stopped for lunch and an outfit change.  My next ensemble was much more like what I would wear on a regular day: jeans, kitten heels, and a blazer.  Chris took pictures of me in front of the set, and then the real fun began.  While Chris directed, a time lapse video a time lapse video of me organizing the set was taken.  I worked with the prop stylists from top to bottom and left to right.  We arranged the books in color and size order, we alternated between horizontal and vertical displays, used props of every type, and even put pictures on the mantle.  It took us about 30 minutes in real time, but the video speeds it up to a minute!

As it approached the late afternoon, we needed to hurry a bit, so we didn’t lose the light.  I had one more outfit change (jeans and blouse), and posed with different organizing tools like the Brother P Touch label maker, bins, and folders.  By this time, I was an old pro, and could smile and position myself easily into whatever poses Chris thought would work. There were a lot of laughs at the end as we wrapped the shoot.  Admittedly, I was a little sore the next day (from using “modeling” muscles never used before), but what an experience to be queen for a day, the Queen of Clean! 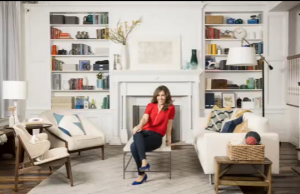