The kitchen, the hub of this home, had become a way station for bills, catalogs, homework, books, toys, gadgets ordered online, and any thing else that came through the door. The pantry, while enviably large, was not organized in any particular way. The drawers, which were plentiful, were filled with duplicates of cooking utensils and random items, and the placement of items did not reflect the frequency of use or amount of space required to keep related items together.

We started by addressing the drawers. We took everything out and grouped duplicate items together. At times, we found three or four of a particular kitchen tool or items of no use, so we made piles for donation and discarded what was in poor condition. We also talked about how the kitchen functioned and what how it related to other areas of the home. This led us to move all tools to a basement area but to maintain a section for school supplies in the kitchen since this was where the boys often did homework. When we had pared down substantially, we utilized bamboo expandable drawer organizers, bamboo drawer inserts, and bamboo drawer dividers to better customize the drawers and create spaces for different categories of kitchen.

When the drawers were complete, we then removed everything from the pantry. Since the shelves were so deep, we found many “forgotten” items pushed to the back that were well passed the expiration date.  These were discarded along with the prior year’s Halloween candy, food received in gift baskets but never opened, and anything else that wasn’t wanted. We then mapped out what was used most frequently (and therefore demanded prime pantry real estate) and what was used only on occasion. We repurposed a large drawer filled with light bulbs and packing tape to contain the boys’ snacks and moved all of the “refill” food to higher shelves. After determining what would go where in the pantry, we contained, decanted, and corralled the food in containers that we had measured to fit the space.  We used a combination of white taper bins, OXO canisters, wicker baskets, and deep pantry bins in this space, labeling each container to ensure that organization would be maintained.

Like most households we organize, this kitchen had piles of papers and books on the kitchen counter. After sorting through the piles, we provided rules for what should be saved and what could immediately discarded. For example, the only schoolwork that would be saved was creative writing and the occasional school project. Catalogs and advertising flyers would be immediately recycled, and bills would be taken upstairs to the office to be paid. We suggested that mail be opened and processed daily since this task, although often dreaded, takes less than five minutes a day. See the Office section below for more detail on paper clutter and management.

We eliminated any mismatched sets of dishes and glasses as well as anything chipped or broken. After rearranging the shelves so that what was used most was on the lowest shelves, the cabinets were functional and attractively arranged.

The open shelving in this kitchen filled mostly with cookbooks, but also a few coffee table books, papers, and random warranties. After removing everything but cookbooks, we then categorized them by type of food, and then color blocked them to the extent possible.  We then styled the shelves using bookends, and some appealing collectibles that were cluttering the kitchen counters. 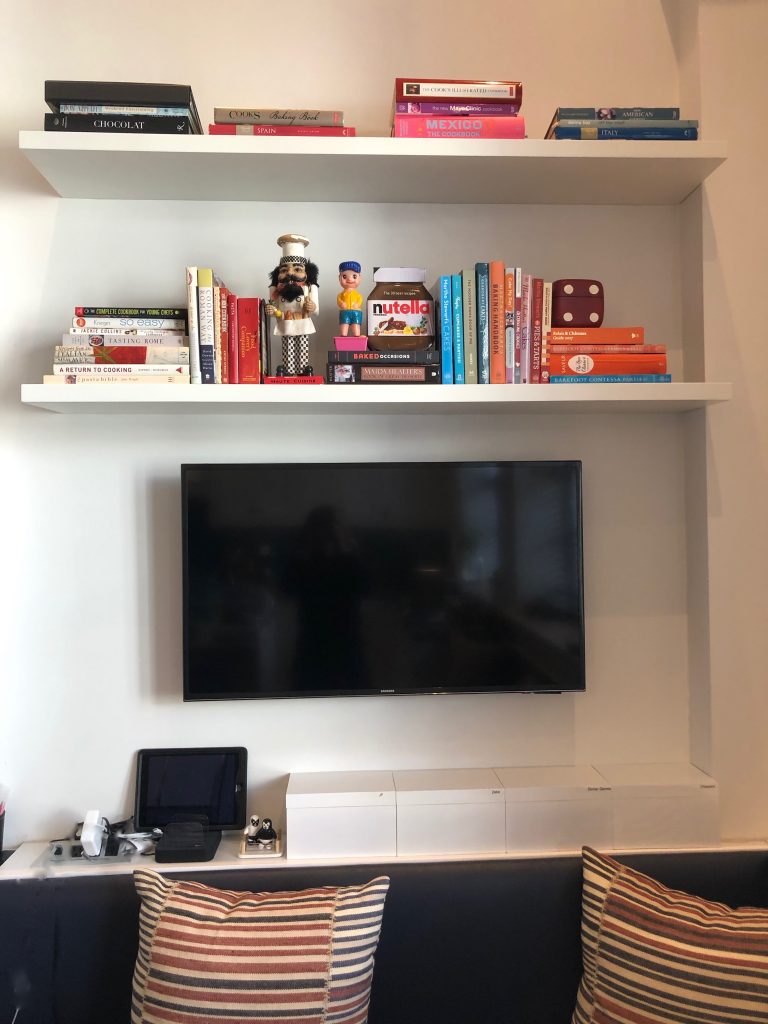 On a ledge next to the kitchen banquet, we found a multitude of electronics, chargers, toiletries, and the boys’ pencil cases. In order to eliminate the clutter here, we used white lacquer boxes from The Container Store that became invisible against the white wall.

NextThree's a Crowd: A Single Mom, Her Triplets, and a One Bedroom Apartment